What is it to live well? What is quality of life? Hard questions to answer for sure, though maybe a bit less so than, ‘Where did we come from?’ or ‘Why are we here?’

I think quality of life must include living securely amongst those you love, or at least those you understand and trust. For example, if I were Japanese living out in whatever passes for the sticks in Japan, I imagine that I would take comfort in living amongst my fellow Japanese because of a mutual trust and understanding that has developed over countless generations, a time during which our common ancestors dwelt together, thus bequeathing to us all the same language, history, notions, inclinations, tastes, etc.

This idea is universal and unchanging, as we see throughout history and wherever humans dwell.

I imagine that the Japanese that dwell outside of Japan’s mega-cities can yet identify with their Japanese ancestors who lived in those islands in 1900, or 1800, or 1600, or 1,200, or let’s say 500 BC. Just as our relatively young Southern culture has evolved over the last 400 years, their culture has shifted and morphed through the ages, but it has only shifted and morphed. It yet remains essentially Japanese and I bet they like it that way.

So! The post-industrial population of Japan is ageing and declining in number, and fast, and the Japanese are understandably anxious. The first concern is practical. With a declining birthrate, who is going to fund the social welfare state they have built that has shifted the burden of taking care of the old from their family to the state? There are now far too few young people paying taxes, and far too many old people needing those taxes to be paid for the system to keep working as expected. Furthermore, how is Japan’s vast and advanced infrastructure to be maintained? To live in a fine mansion is nice if you need the space and you have the strength and purse to keep it up. But what if it is just you and the old missus and the roof needs to be replaced?

The technocrats that designed the system, and the bureaucrats that man and feed off of it, might suggest that you just import working age immigrants to do the work and pay the taxes.

But this leads to and exacerbates the second concern.

If they run out of Japanese, what’s to become of Japan? Dont you have to have Japanese in order for it to be Japan? Of course you do. If you were to replace every Japanese with a Russian, those islands would be as much Russian as Virginia was English back in the day.

But maybe they could import a bunch of young Koreans. No, that wont do because Korea’s birthrate has collapsed as well. Likewise China’s. How about a bunch of Filipinos? Or Malaysians?

The problem is that Filipinos and Malaysians have their own ancient history that made them who they are, and they would bring the entirety of it with them were they to come to do Japan’s menial tasks and to pay Japan’s taxes to keep Japan’s gravy train rolling.

And if you add a new ingredient to the stew, its not same stew. Maybe it’s better. Or maybe not.

But the reality is, the more outsiders you bring in, and the more radically different their culture, the more you’ll impact the indigenous culture. Just ask the Choctaws.

If I were an old Japanese and I loved Japan I would tell my generation that we ought not milk the system, or import boatloads of foreigners to make our twilight years more comfortable, if it means we would not be bequeathing a Japanese Japan to our Japanese children. I like to think that I would take one for the team and lower my expectations.

I would also tell my children and grandchildren to get busy and make some more Japanese. 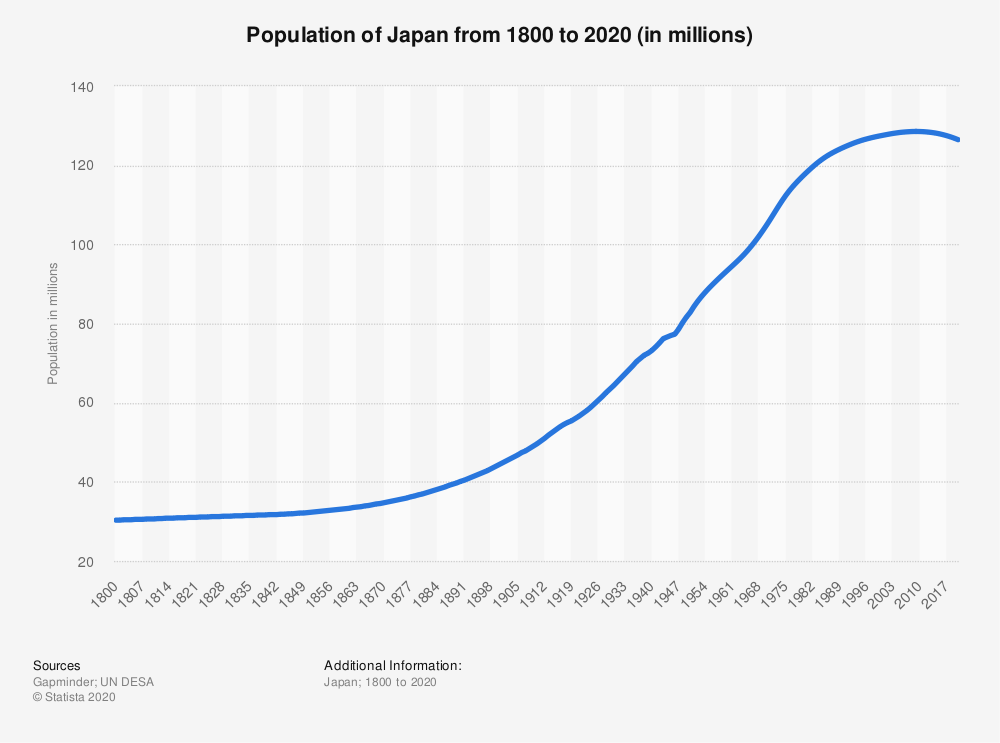